At least 14 new soy processing projects are in various stages of construction, expansion or development, according to recent company announcements. Altogether, about 450 million bushels (mb) of additional soybean demand is expected to occur in the next few years, although the number is likely tens of millions of bushels low since Cargill and Ag Processing Inc. (AGP) are increasing crush capacity at three existing plants but declined to provide bushel figures to DTN/Progressive Farmer.

"I do think this will be good for the American soy farmer. We like to see demand," said Stan Born, a Lovington, Illinois, grain producer and vice chairman of the U.S. Soybean Export Council.

This is the second story in DTN's four-part series -- called Cash in on Soy Crush -- that looks deeper into why renewable diesel demand exploded to trigger a rapid expansion of soybean crush. In this story, DTN examines where some of the investments in expansion are taking place and what are some of the worries that go with it.

Soybean oil has the most growth potential of all biomass-based diesel (biodiesel and renewable diesel) feedstocks to meet future industry needs, according to a recent study by LCM International, an ag consulting firm. Other feedstocks include animal fat and grease, used cooking oil, corn and canola oil and more.

The study, "Lipid Feedstocks Outlook to 2030," commissioned by the Advanced Biofuels Association, projects feedstock consumption for biomass-based biodiesel will increase from 19.8 billion pounds in 2020 to 70.5 billion pounds by 2030. Soybean oil currently accounts for nearly half of the feedstocks used.

"Soybean oil will have to carry it (feedstock demand)," said Donnell Rehagen, CEO of Clean Fuels Alliance America. He noted other feedstocks have limited growth potential.

Shell Rock Soy Processing (SRSP) is under construction in Shell Rock, Iowa, and is expected to be operational late this year. CEO Corey Jorgenson said demand for soybean oil is the primary driver of the project.

Phillips 66 invested in SRSP for the rights to buy all of the more than 400 million pounds of crude soybean oil it's projected to produce annually at full capacity. Phillips 66 is converting its Rodeo, California, oil refinery into a biofuel juggernaut capable of making 800 million gallons a year of renewable diesel, renewable gasoline and sustainable aviation fuel.

The latest USDA crush estimate for the 2021-22 marketing year is 2.2 billion bushels (bb). Jorgenson said the potential of an additional 500 mb of soybeans being crushed -- SRSP's annual capacity is 38.5 mb -- is significant.

"I think it does reset (soybean) prices," he said.

Crushers and foreign buyers will battle for whole beans. Biofuel refiners, food companies and other industrial users will vie for soybean oil. As competition heats up, soybean and corn prices are destined to rise with the battle for acres, said DTN Lead Analyst Todd Hultman.

"It's as bullish a change in demand as we've seen since the ethanol boom, and it might be even bigger," Hultman concluded. "It's a net positive for farmers overall."

While difficult to predict how average commodity prices will be affected, Hultman said added demand will give prices more support. He said he wouldn't be surprised to see a new floor price for soybeans at roughly $12 per bushel, up from $8 per bushel. For corn, the new support level could easily increase from $3/bu to up to $5/bu.

"Even though commodity prices are high now and downtimes seem far away, I think it's in the downtimes when the value of biofuels really show up for the farmer," Hultman said.

University of Minnesota Extension released an economic impact and basis analysis report in early 2019 pertaining to a new soybean crush plant in Crookston, Minnesota. Construction is slated to start this year. Crush capacity is 42 mb per year.

Soybean basis levels near Crookston are estimated to improve by 10 to 20 cents per bushel, possibly higher in other locations, according to the report. Cash soybean bids at the CHS soybean processing facility in Fairmont, Minnesota, are routinely 15 to 30 cents per bushel greater than grain elevators within 10 to 30 miles of the town, the report said. CHS recently expanded the plant's crush capacity from 55 to 72 mb/year.

Ed Lammers raises soybeans in northeast Nebraska near Hartington. He's looking forward to an economic boon that two new large bidders for soy in the state will bring when crush plants in Norfolk and David City are operational in 2024 and 2025, respectively. The combined crush capacity of the plants is 88.5 mb/year. Nebraska produced nearly 351 million bushels of soybeans in 2021, according to USDA data.

Lammers expects competition for bushels will bolster soybean bids within 100 miles of the plants because farmers, like him, aren't afraid to truck soybeans if the price is right.

"My basis will be narrowed. It's a plus for eastern Nebraska soybean producers and our economy," he said.

Born added that revenue potential due to more competition for soybeans is exciting, but "It's always tempered by reality because there's a lot of hurdles to be able to realize all that excitement."

Will there be enough soybean acres and production to satisfy growing domestic and foreign demand? Will there be adequate, affordable feedstocks for all renewable diesel and biodiesel plants, both big and small? As crush increases, is there a market for more soybean meal? Can soybeans be bred to produce more oil without sacrificing yield and protein content?

All these questions are on the mind of John Heisdorffer, who farms near Keota, Iowa. As an investor in Iowa Renewable Energy (IRE) in Washington, Iowa, he's most worried about the future of small biodiesel plants like IRE. Its capacity is a little more than 30 million gallons per year.

Heisdorffer called renewable diesel expansion a double-edged sword. Increased soybean demand and prices are good, but soybean oil and other feedstocks are harder for biodiesel plants to secure and more expensive. That's a burden for small refineries like IRE.

The average price of soybean oil is 70 cents/lb. in the 2021-22 marketing year, according to the April World Agricultural Supply and Demand report. That's more than double the price from two years ago. July soybean oil jumped up 26% during April to 86.60 cents/lb., posting three new all-time highs during the last week of the month.

Heisdorffer, who's a member of IRE's board of directors, said skyrocketing feedstock costs are making it difficult for the plant to operate in the black. "It's hard for a smaller biodiesel plant to make headway these days because we don't have the capital to buy soybean oil for a year or make an agreement to buy it for a year."

He's worried about the long-term future of IRE and other small biodiesel refineries as giant petroleum companies jump on the renewable diesel and biodiesel bandwagon and partner with crushers. Besides Phillips 66 and Shell Rock Soy Processing, here's a few more:

-- ADM and Marathon Petroleum Corp. are partnering to build a $350 million soybean processing facility in Spiritwood, North Dakota. When complete in 2023, the facility is expected to produce 600 million pounds of refined soybean oil annually that will produce 75 million gallons of renewable diesel per year.

"We can't get enough feedstocks now to run at full bore," Heisdorffer said, noting more soybean acres will be needed and possibly tweaking breeding programs to change soybean composition. "The next thing, I guess, is pushing the limits of the soybean itself as far as oil content."

The $950 million project was driven by demand for lower-carbon fuels from customers with strong sustainability programs in place, REG said in a news release. The plant is expected to be fully operational at its new capacity by 2024.

"We'll see increased innovation in feedstock development, such as cover crops," Fernandes continued. "There's adequate supplies now and they will continue to grow."

This is the second story in DTN's Cash in on Soy Crush series. 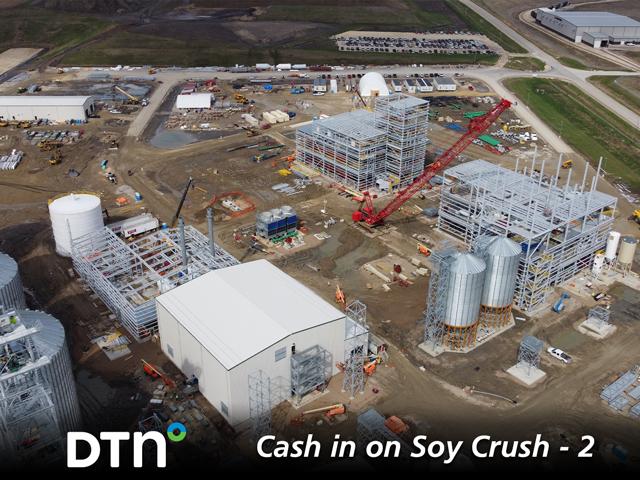