ROCKVILLE, Md. (DTN) -- If you think the human dating game is tough, just be grateful you aren't a mosquito or a fall armyworm moth.

Then you'd have to worry about a new type of mate fluttering around. Sure, they're up for a date or two, but 50% of your children are doomed.

Dubbed "self-limiting" insects by their makers, a UK-based biotechnology company called Oxitec, these insects are genetically modified (GM) with an inserted gene that permits only male offspring to survive. Once released into a pest community, the GM insects gradually lower the population, accomplishing a new type of pest control. Then, rather politely, they die off themselves.

"After we stop releasing the self-limiting males, the gene declines in a population over a short period of time and within a few generations, disappears," Neil Morrison, head of agriculture programs for Oxitec, told DTN. "It's a gene that prevents survival of half its carriers -- the females -- so it's essentially programmed to decline and disappear quite rapidly."

Sound too sci-fi to be real?

Officials will set out boxes full of GM mosquito eggs this week, which are expected to send out about 12,000 mosquitoes each week for 12 weeks. The goal is for the GM mosquitoes to lower wild populations of this destructive mosquito species, famous for its ability to carry devastating viruses such zika, dengue and yellow fever, while leaving alone other mosquito populations. Read more here: https://www.keysmosquitoproject.com/…

There's reason to believe it will work. In trials conducted in Brazil, the GM mosquitoes suppressed 95% of the Aedes aegypti mosquito population in the targeted area in fewer than three months, without insecticides.

Oxitec has its eyes on commercial agriculture, too. With permits in hand from USDA, the company has already done a successful experimental field release of GM self-limiting diamondback moths (cabbage moths) in New York. See the DTN story here: https://www.dtnpf.com/…

Now Oxitec has received regulatory approval from Brazilian authorities for the company's self-limiting fall armyworm moths. The company has already conducted two seasons of test releases of the GM fall armyworms in corn in Brazil. Now that the trait has been deregulated, Oxitec is working towards commercializing it, Morrison said.

"We've spoken to a lot of growers around Brazil the last couple years and they are extremely eager to find new solutions to this pest and really like the sound of an environmentally friendly alternative to insecticide sprays they currently have," Morrison said. Fall armyworm is a major pest of corn in Brazil, and it has developed resistance to both insecticides and Bt traits in South and North America.

As a result, Oxitec's unique GM insects have gained interest from a heavy hitter in agriculture: agrichemical giant Bayer. The company is collaborating with Oxitec on its fall armyworm project in Brazil.

"An initial three-year research phase enabled the early development of the [self-limiting] fall armyworm," confirmed Bayer spokesperson Charla Lord, in an email to DTN. "Under the current research phase, the collaboration is focused on conducting regulatory trials and product stewardship activities, deploying initial field trials in Brazil and piloting scale-up of the technology."

Bayer is also in "an early research collaboration" with Oxitec on its next project -- self-limiting soybean loopers, another common pest of soybeans in South and North America, Lord confirmed.

So could the self-limiting insects come to U.S. agriculture? Lord said it was too soon for Bayer to speculate, but Morrison is hopeful they will be a valuable crop tool here someday, especially given the historic deployment of the company's GM mosquitoes underway in Florida.

"Brazil is a country where fall armyworm is a particular problem, because it develops resistance to new tools very rapidly in their environment," he said. "But it's a major pest in other countries, too, so we do see value for it in the rest of South America, central America, the U.S. and -- where fall armyworm has most recently invaded -- Africa and Asia."

Oxitec has branded both the GM mosquitoes and armyworms as Friendly Fall Armyworm and Friendly Aedes aegypti, a nod to the environmentally friendly effects the company hopes they could have, such as reduced insecticide use and reduced pest resistance.

Morrison is quick to note that the GM insects should be positioned as a complementary tool to ag's current pest control strategies. The self-limiting moths contain natural susceptibility to insecticides and Bt traits, which means they can help dilute and lower resistant genes in the wild populations they encounter, potentially preserving the efficacy of those current control methods, Morrison added.

They also contain an additional trait: a marker gene that produces a protein that glows red under a special filter, which helps scientists track the self-limiting moth's movements and confirm their decline over time.

Testing has shown the self-limiting gene used in Oxitec's mosquitoes and moths aren't toxic to predators, and they mate within their same species, so they shouldn't affect other types of moths and mosquitoes. And, unlike a gene drive, where genes are introduced into a population to permanently alter the genetic make-up of an insect population, Oxitec's GM insects will not persist in the environment, should they flutter far out of their target fields.

"We're engineering the insect to genetically carry its own self-containment," Morrison said. "Where it will land on neighboring crop, it can't establish. We see our self-limiting insects being a really powerful, sustainable future solution for growers." 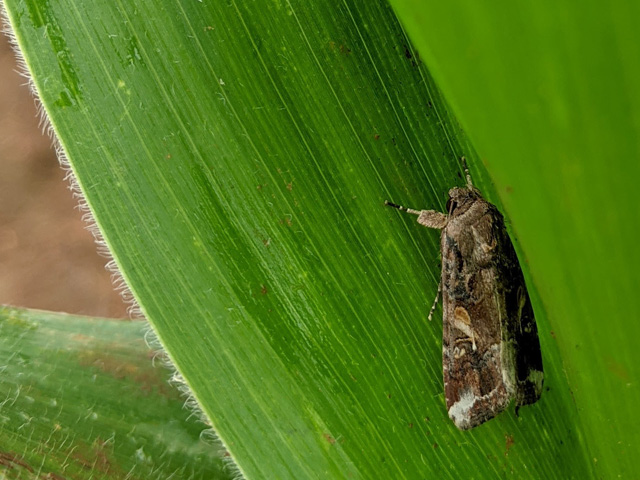