ANKENY, Iowa (DTN) -- At the conclusion of the 2021 Wheat Quality Council's Hard Winter Wheat Tour on May 20, more than one industry official said that most everything that happens to the crop after the event until harvest is bad.

It took less than a week for that prognostication to come true.

Hail pummeled what were mostly great-looking hard winter wheat fields in central Kansas on May 26. Heavy rains associated with the storm exacerbated already wet conditions in the region creating many areas of standing water, which will likely stress or kill some hard winter wheat.

"I think overall production is still falling in that same area of the wheat tour estimate for Kansas," Gilpin said. "Once we get into harvest, I think we will see both ends of the spectrum for extremes. Fields that really benefited from management and the environment (cool weather and adequate moisture) and those that had good yield potential but were unfortunate to take the brunt of Mother Nature."

DTN Senior Ag Meteorologist Bryce Anderson said severe weather lashed southwestern Nebraska, northwestern and central Kansas and the Oklahoma-Texas Panhandles on May 26. There were 91 hail reports, including 20 reports of ice chunks that were 2 inches or more in diameter. Rainfall amounts from 1.5 to 4 inches were recorded.

"A corridor from southwestern Nebraska through central Kansas had the most (hail) reports," Anderson said.

Some of the hardest-hit fields in Kansas were in Ellis, Ellsworth, Russell and Lincoln counties along Interstate 70, according to Gilpin. Up to baseball-size hail shredded some hard winter wheat fields and damaged others.

When the hail ended, Gilpin said rain continued in the Interstate 35 corridor from Salina to Newton. "That's where we're getting reports of big patches of fields with dead wheat due to standing water," he added.

I attended the Hard Winter Wheat Tour from May 17-20. I saw plenty of fields with exceptional yield potential. Many of those were in central Kansas.

It's sickening to see and hear about damaged fields that held such promise. My heart goes out to those farmers. But I can understand Gilpin's continued optimism for the crop given tour yield estimates. Read the tour wrap-up story here: www.dtnpf.com/agriculture/web/ag/crops/article/2021/05/20/hard-winter-wheat-tour-predicts-58-1.

The tour's yield projection far exceeds the USDA's national yield prediction of 52.1 bpa. Scout yield estimates were also the highest in 19 years, and most likely the best in the event's 40-plus year history, according to Gilpin.

However, the crop isn't in the bin yet so no one truly knows what the future holds for production and yields.

Kansas is the nation's largest producer of hard winter wheat. The crop has endured scattered bouts with drought, disease and insects. Farmers and others on the tour told me winter wheat is hardy and often has nine lives. Let's hope the crop has several more left after the latest round of bad weather.

Craig Dinkel, Kansas State University Extension crop and horticulture agent in the Midway District (Ellsworth and Russell counties) scouted fields in his district on June 2. He expects yield losses from the latest storm.

Fields west of Holyrood, Kansas, going into Barton County were the hardest hit by hail with some field losses at 80 to 100%, Dinkel said. Other fields, such as by Lorraine, may see minimal or 25 to 50% loss.

"It (the storm) could have been a lot worse," Dinkel said. "There was some really good wheat around Holyrood and Lorraine, and there still is. Damage wasn't widespread but there were some shredded fields."

If a field isn't harvestable, there's still time to plant a different crop depending on what herbicides were used. Soybeans or sorghum are options. Dinkel encourages farmers with damage to contact their insurance agent before they proceed with replanting. 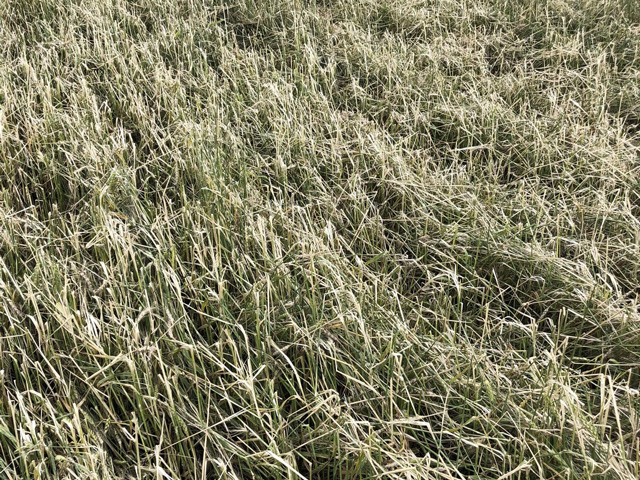