DECATUR, Ill. (DTN) -- Questions about gender and equality remind me of walking in a field of harvested cornstalks cut at shin height. Whether I walk with the row or clumsily swing my leg over the precisely placed bayonets, there nearly always comes an inevitable stumble and painful impaling.

I mark my 44th year of working in agricultural journalism in May. One would think I could discuss topics of gender without incident at this point. But it never happens -- the topic, it seems, waits to trip me up with uncertainty about my own thoughts with regard to gender bias.

Today, March 8, 2021, is designated International Women's Day 2021. In fact, it begins a whole week devoted to calling out gender bias and inequality. This year the campaign theme is #ChooseToChallenge.

Until recently, I've held fast to the belief that the world would wake and become self-aware about gender and many other questions of equality.

I am often asked how it feels to be a pioneer who helped break down barriers for women in agriculture. The question almost always generates an inward sigh and a mental weariness on my part. Can't we all just move on?

It's true that I had to fight for the right to attend high school vocational agriculture classes and participate in FFA. Girls were restricted from membership by delegate vote in 1930 and that wasn't fixed until 1969. It took President Richard Nixon signing Title IX in 1972 to open those gates for me at my high school. It's true that sometimes keeping that gate open was more like grabbing a hot wire.

Most of us who came up during those days have tales to tell and some of them remain troubling. For example, I never told my parents about the day I came to school after the FFA sectional soil judging contest to find a picture displayed in the classroom of my backside bent over a soil pit.

It's true that I was among the early women willing to charge through mud and manure to be a "field editor" for an agricultural magazine. It's also true that the editor I reported to at that time demanded, among other antiquated thoughts, that I wear a dress or skirt to on-farm interviews.

I found this and other rules as ridiculous as the sincere "suggestion" by an early co-worker that it was fine if I wanted to work as a journalist, but I shouldn't be paid. In his opinion, I was "taking a livelihood away from another family."

For me, the early efforts to break down barriers were all about inclusion. All I ever asked was for an equal chance to try and to be evaluated on my own merits. It is for these reasons I have, in the past, found myself flinching at special efforts and events that single out women.

Put more bluntly, I worked awfully hard to not be seen as different, but the same.

Still, I also pride myself in having the ability to listen and weigh other opinions. Finding the courage to change a mindset or belief that one has held firm is much harder than having a conviction.

In modern day vernacular, I think I am finally "woke" to the fact that hoping against hope for bias blindness to happen isn't enough. Because, if I'm honest with myself, the barriers and challenges have never gone away. I've just chosen to put my head down and work harder when they appeared.

Lately, children's literature has been churning out fascinating biographies of individuals who dared to believe and persevere in the areas of science, technology, engineering and mathematics (STEM) to make differences in the world.

Reading these histories -- many of them names I've never encountered -- has opened my eyes further to the need to share these kinds of gutsy stories.

As a much younger colleague recently pointed out, it is important to recognize when people break through social ceilings, so others see it is possible. In her words: "It is difficult to 'want' to be or do anything when you don't see anyone who looks like you in these roles."

You might be surprised, as I was, that today's international day of recognition for women has occurred for well over a century. The first official gathering was in 1911 with over a million people attending rallies to campaign for women's rights to work, vote, be trained, to hold public office and end discrimination. For the past dozen years or so, the United Nations has been also recognizing the International Day of Rural Women in October.

That's a lot of asking to be recognized and heard.

Yet, Corteva Agriscience released a 17-country study, conducted between August and September 2018, showing how women are being held back from full and successful participation in agriculture.

The study included 4,160 respondents living in both the developed and developing world on five different continents. Most of the women were engaged in crop farming, with others engaged in a variety of other farming and related agricultural pursuits. Of those polled, 21% were from the United States.

It revealed that although women are overwhelmingly proud to be in agriculture, they perceived gender discrimination as widespread, ranging from 78% in India to 52% in the U.S. Only half said they are equally successful as their male counterparts; 42% say they have the same opportunities as their male counterparts, and only 38% say they are empowered to make decisions about how income is used in farming and agriculture.

I have fought for my right to be in the field or farmyard since I could unlatch the back door of the farmhouse and make my escape. I see progress toward acceptance when I drive by the FFA farm near my home and find diversity of students working side-by-side. I know that my own career is a testimony to more openness.

But there's still so much work to do. I have also continued to witness patriarchal mindsets that keep women from stepping in to manage farms and/or inherit land.

I still hear too many stories about difficulties dealing with marketers and salesmen. There's nothing quite like having someone suggest that perhaps your husband should make the transaction -- especially when you have done the research and are writing the check.

Almost every time I think I've earned the respect to be seen as an equal, a bully-like reminder sneaks in to prove stereotypical notions still exist.

As an industry, we need to do better. I'm challenging myself to do better job of calling out gender bias for what it is -- because not doing so is painful, too, and telling myself it will go away simply isn't working.

The report from Corteva can be accessed here: 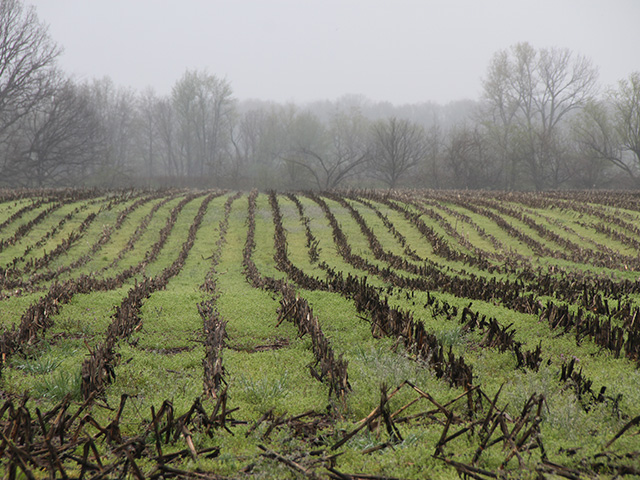