Innovations in science and technology have accounted for 85% of America's economic growth since World War II, so it's no surprise that Uncle Sam keeps close track of the nation's progress. (https://www.washingtonpost.com/…)Every two years the National Center for Science and Engineering Statistics, a unit of the National Science Foundation, issues a detailed report titled "The State of U.S. Science and Engineering." The latest report, out just last month, offers a bit of good news -- and a fair amount of not-so-good. (https://ncses.nsf.gov/…)

The good news: On an absolute basis, the U.S. is still in many ways the world's technological powerhouse. The less good: The rest of the world, particularly China, is catching up fast and in some areas is already overtaking us. Moreover, U.S. science and engineering is increasingly dependent on foreign-born workers, many of them Chinese.

Consider a few of the findings from the latest report:

-- China's expenditures have been growing four times as fast as America's, indicating China has since overtaken the U.S. Between 2000 and 2017 the U.S. share of global R & D expenditures fell to 25% from 37%.

-- The U.S. spent 17% of its R & D funds on basic research while only 6% of China's spending was on the creation of knowledge. The great majority of spending in both countries was on applying knowledge to create products.

-- The U.S. still leads the world in the output of the most R & D intensive industries, such as aircraft, pharmaceuticals and computers. But other countries' output, especially China's, is growing faster, so the U.S. share of world output of these industries fell to 32% in 2018 from 38% in 2003.

-- American eighth graders' science and math scores in 2015 ranked below those of their counterparts in Singapore, South Korea, Taiwan, Hong Kong, Japan and Russia. They showed a slight improvement over 1990 but little to no improvement in the last decade.

-- In 2017 foreigners earned a third of the S & E doctoral degrees awarded in the U.S. and half of the degrees in engineering, mathematics and computer sciences.

-- More than half of the doctorate holders working in computer science, engineering and mathematics in the U.S. in 2017 were foreign-born.

These trends are of real consequence for U.S. farmers and ranchers. For agriculture is, in its own way, as dependent on the nation's scientific level as the aircraft and computer industries. And agricultural technologies are among those that are at stake in this country's relative technological decline.

The rapid advance of China in science and technology has drawn attention to some of the ways it has advanced, including intellectual property theft. For an example of these thefts at work, read this fascinating Nov. 22, 2019, article by DTN's Ag Policy Editor Chris Clayton. He described how a Chinese scientist working for Monsanto was arrested as he tried to leave the U.S. with Monsanto's Nutrient Optimizer technology on a Micro SD card. (https://www.dtnpf.com/…)

China also buys a lot of technology from willing American sellers. Charles Lieber, a leading American expert on nanotechnology who chairs Harvard's chemistry department, was arrested recently for not reporting $1.5 million he was paid to set up a research laboratory at Wuhan University of Technology in China. (https://www.wsj.com/…)

It's understandable, then, that the Trump administration has insisted in its trade talks with China on commitments to end intellectual property theft. But that's far from enough. For America to continue to be a world leader in science and technology, the U.S. needs to do some things at home that the Trump administration may find less to its taste.

One is to stop discouraging foreigners from studying at American universities. Owing to the administration's frequently voiced and highly unfriendly attitude toward immigration, there has been a marked fall-off in enrollments. (https://www.forbes.com/…)With so many native-born Americans showing so little interest in math and science, the country will need a steady stream of foreigners in the short run.

In the longer run, this country must do a much better job of math and science education. With a population a fourth of China's, the U.S. will probably never turn out as many science graduates. But it needs to turn out more.

Finally, the federal government needs to spend more on basic research. The federal share of the nation's research spending has been declining for the last couple of decades. While it's good that business has picked up the slack, most business R & D naturally focuses on applied research. Agriculture is one area very much in need of more federal research support.

It's natural that the rest of the world is doing more research; the U.S. will likely benefit from some of it. But to maintain our standard of living and our place in the world, continued leadership in science and engineering is essential. Even in times of big budget deficits, this is an investment the country must find a way to make. 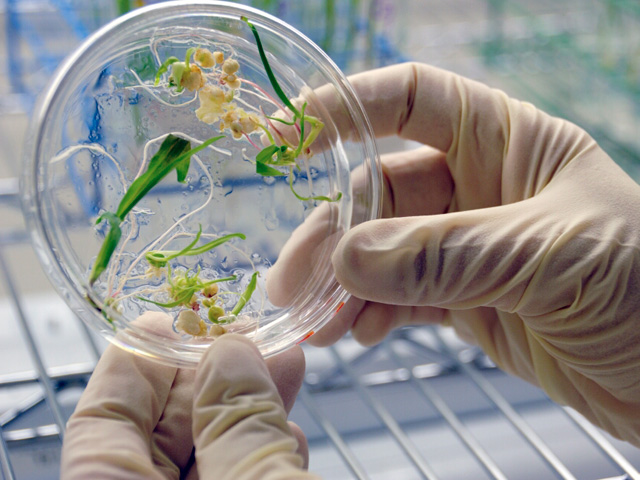