If there is such a thing as a short-duration La Nina, it appears that one is underway in the equatorial Pacific.

Atmospheric measurements, as noted by the Southern Oscillation Index monitored by the Australia Bureau of Meteorology, have also come around to La Nina categories. The 30-day SOI reading Oct. 26 is plus 12.12 -- which is an indication of a weak La Nina. The threshold for La Nina is plus 8.0 for the 30-day reading. The 90-day value is close to the La Nina threshold at plus 7.07.

So, La Nina is in effect. But, the duration of this event does not seem to be for a long number of months. Forecast models from both the U.S. Climate Prediction Center and the Australia Bureau of Meteorology call for the Pacific temperatures to move away from the cool La Nina levels to neutral during the first quarter of 2018.

This is a big difference from the last La Nina event in 2010 to 2012. Seven years ago, the Pacific went into La Nina temperature and atmospheric categories during the last half of summer 2010, and pretty much stayed there all the way through 2011, and even into the first part of 2012. We know what happened during that time: U.S. crop yields took a three-year hit, culminating with the calamities of 2012.

For the 2017-18 La Nina, South America will get the greatest attention, because the maximum intensity of this event shows up during the Southern Hemisphere summer. There is a strong relationship between La Nina and drier conditions in southern Brazil (Parana, Rio Grande do Sul) and the entire central Argentina crop belt (Buenos Aires, Santa Fe, Cordoba). If there is crop-weather stress from this La Nina, it's most likely to be in South America, given conditions as they present themselves at this time.

The implication from this relatively brief La Nina is that it looks like this event will end too soon to be a hot and dry weather threat to the major U.S. crop areas during summer 2018. There is still a long way to go both in 2017 and, of course, through 2018; however, this event will obviously get a healthy amount of attention. 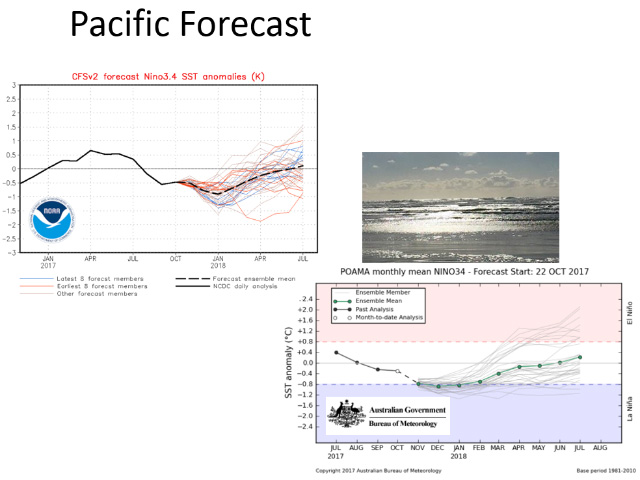