Following is an excerpt from the NOAA Climate Prediction Center's climate.gov website, which goes through some interesting detail on how the Pacific Ocean conditions have backed away from El Nino tendencies in the past couple of months. The full article, with additional graphics, is at this address: https://goo.gl/….

"A change is afoot! After months of suggesting an elevated chance for El Nino to develop, the CPC/IRI forecast has flattened out, and neutral conditions are expected (50%-55% chance) to continue through the fall.

"In fact, the Nino3.4 region (a key ENSO monitoring area in the tropical central Pacific) is hovering around 0.5 degrees Celsius warmer than the long-term average. Yep, that's the threshold for El Nino, but surely you remember that ENSO is a seasonal phenomenon, meaning those warmer sea surface temperatures need to stick around for several months- long enough to provoke an atmospheric response.

"Despite the warmer sea surface temperatures, the atmosphere is not behaving like El Nino. During May, the indicators that we track looked very average, including both the upper-level and near-surface winds over the equatorial Pacific and the amount of rain and cloudiness in the central Pacific and Indonesia. The indexes that measure the difference in the atmospheric pressure between the central Pacific and the far western Pacific, the Southern Oscillation Index and the Equatorial Southern Oscillation Index, were both close to zero in May, indicating, again: neutral conditions.

"Most of the recent forecast models predict that the Nino3.4 region will move closer to average temperatures over the next few months. The average of all the dynamical model forecasts in the North American Multi-Model Ensemble flattens out at slightly above the long-term mean for the rest of this year. Averaging all model forecasts together usually produces the best forecast, because it reduces the noise and highlights the signal.

"Combine these neutral atmospheric conditions, cooling forecasts, and the lack of any substantial warmth under the surface of the Pacific, and you get the current forecast of an approximately 50%-55% chance of continuing neutral conditions through the fall."

For more on the forecast for the Midwest this weekend, see my article "Weekend Midwest Heat Watch" in the DTN Ag News section: http://bit.ly/… 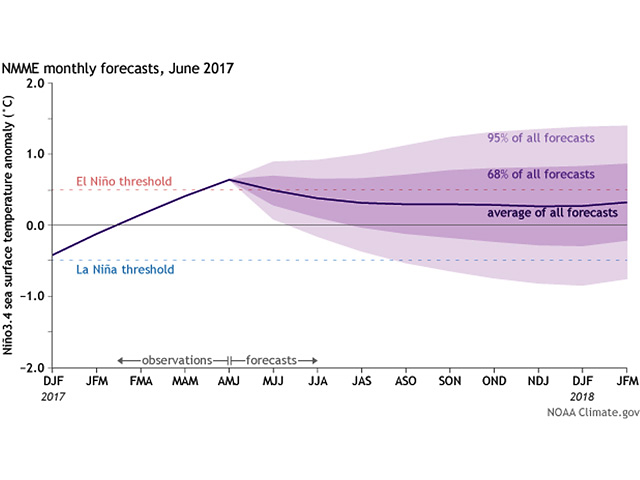