Democrats are favored to hold onto the House, though upsets are bound to occur. With 218 seats needed to maintain majority, Democrats are considered "solid" or "likely" victors in 209 races while Republicans are considered solid or likely in 166 races, according to Cook Political Report.

Democrats have another 19 races that appear to be leaning their direction while Republicans have 15 such races. There are 26 House seats considered "toss-up" races right now, Cook Political Report noted.

Another polling website, FiveThirtyEight.com, states 80% of its statistical outcomes from 40,000 simulations put Democrats somewhere in the range of 224 to 254 seats, with the average at 238-239 seats.

The current make up of the House is 232 Democrats and 197 Republicans with one Libertarian, Rep. Justin Amash, who left the GOP earlier this year and chose not to seek another term.

Among the toss-up races, though, one of the biggest challenges is in the Minnesota 7th Congressional District, where House Agriculture Committee Chairman Collin Peterson, a Democrat, is in a tight race against former GOP Lt. Gov. Michelle Fischbach.

Peterson, 76, first won the seat in 1990, so he is seeking his 16th term in the district. This is a district where Peterson has won by 4.2% in '18 and 5% in '16 But the 7th District, covering pretty much the western one-third of Minnesota to the Canadian border, also heavily supports President Donald Trump. Fischbach, who turns 55 on Election Day, also has proven to be a strong opponent.

Given his influence as Ag chairman, Peterson is backed by several agricultural groups in the district, which grows about everything. The district is big into sugar beets and turkey production.

Of the 26 Democrats on the Ag Committee, Peterson may be facing the tightest race. Three freshmen members of the committee have races considered toss-ups but leaning in their favor.

Rep. Xochitl Torres-Small, representing New Mexico's 2nd District, is in a race that is considered a toss up or leans in her favor against Republican Yvette Herrell in another campaign where groups have spent million on TV buys. That race is a rematch from 2018.

Rep. Abigail Spanberger, in Virginia's 7th District, faces GOP state Rep. Nick Freitas, who had been a candidate for U.S. Senate in 2018 before losing the Republican primary. Spanberger is favored to hold hear seat as well.

Of the 24 Republicans on the House Agriculture Committee, at least four members will not return next year.

The Ag Committee will already face a GOP leadership change because Rep. Mike Conaway in the 11th Texas district, the current ranking member and former chairman, chose not to run again. His seat is expected to remain Republican.

Rep. Steve King of Iowa lost his primary race. Republican Randy Feenstra, a state senator who defeated King, is favored in Iowa's 4th District over Democrat J.D. Scholten, who had lost a close race to King two years ago in the heavily Republican Northwest Iowa district.

Rep. Roger Marshall of Kansas is running for the U.S. Senate seat there with Sen. Pat Roberts retiring.

Among the competitive races involving GOP incumbents, five-term Rep. Rodney Davis of the Illinois 13th is in a close race that is considered a toss up or leans in his favor against Democrat Betsy Dirksen Londrigan. Davis defeated Londrigan in a close 2018 race.

Two-term Rep. Don Bacon a Republican in Nebraska's 2nd Congressional District in Omaha hosted President Donald Trump on Tuesday. The Nebraska 2nd is a tossup for both Trump and Bacon, who faces a rematch against community activist Kara Eastman in a race that has seen a lot of money in television advertising, especially from third-party groups.

Rep. Jim Hagedorn of the Minnesota 1st District, another freshman, is also in yet another rematch from 2018 against Dan Feehan, a combat veteran who also had served as acting assistant secretary of Defense. The race leans in Hagedorn's favor. 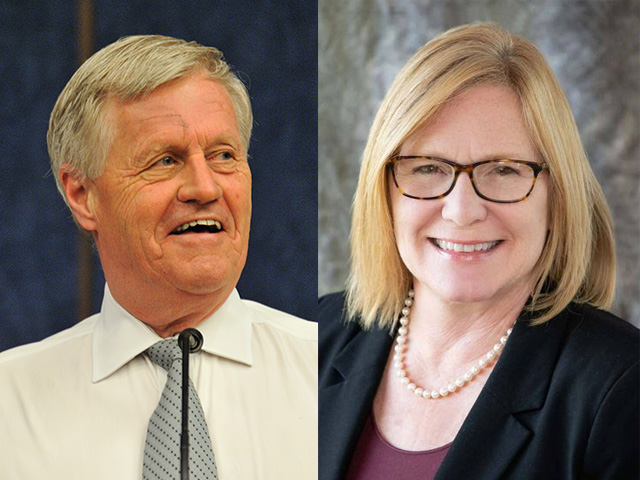