WASHINGTON (DTN) -- The Environmental Protection Agency is on track to propose its rule for the Renewable Fuel Standard after this year by mid-November, EPA Administrator Michael Regan told members of Growth Energy on Tuesday.

EPA also expects to decide soon on a request by eight Midwestern governors that they be allowed waivers that would ensure their retailers can sell E15 year-round, Regan added.

Regan spoke to members of Growth Energy at the group's biofuels summit on Tuesday about the agency's pathway forward on the RFS and E15. Later in the afternoon, biofuel and agricultural leaders also took part in a White House celebration of the passage of the Inflation Reduction Act.

EPA is now working on the Renewable Fuel Standard Set (RFS Set). After a consent decree reached with Growth Energy, EPA is required to spell out the 2023 biofuel blend requirements no later than Nov. 16, 2023. The rulemaking is called a "Set" and is expected to be based on several factors, including fuel costs, emissions and production capacity. Regan noted the high interest in the biofuels industry over that rule.

"EPA staff have been busy meeting with stakeholders over the past year," Regan said. "And we're taking the input of these meetings into account as we develop a proposal."

EPA is also coordinating with USDA and the Department of Energy on the Set rule as well. "We understand that the bottom targets for 2023 and beyond are of great interest to all of you. And we look forward to continuing the critical engagement as we move forward with subsequent steps in this rulemaking process," Regan told Growth Energy members.

As EPA moves forward, Growth Energy has called for the agency to continue setting renewable blend volumes (RVOs) for refiners on a multi-year basis, as the agency did this past year.

EPA in June approved RVOs for 2020-2022. The 2022 RVO restored corn ethanol to 15 billion gallons with total biofuel gallons set at 20.63 billion gallons. Regan noted the 2022 RVO was the largest biofuel blend volume approved by EPA and "will place the RFS program back on a trajectory of responsible growth."

On E15, the Biden administration last May issued an emergency waiver to allow E15 sales to continue this summer. Regan declined to answer a question from DTN on whether the agency would look at a possible new rule that would allow E15 year-round. Instead, Regan told Growth Energy members the agency is working with governors of Illinois, Iowa, Minnesota, Nebraska, North Dakota, Ohio, South Dakota and Wisconsin, all of which have petitioned EPA to allow year-round E15 sales permanently.

"We're taking steps to promulgate a rule," Regan said. "And as quickly as possible, we intend to finalize this action in time for the 2023 summer driving season."

Speaking in a "fireside chat" with Growth Energy's Emily Skor, Regan said the agency is being cautious in how it moves ahead on the E15 rule, given the legal battles the agency has faced in several fronts when it comes to E15.

"What I think EPA has learned, especially with career staff, that is when we rush and do things, or when we don't follow the science and follow the law, it ends up in court," Regan said. "And we all end up waiting in suspense. We wanted to do this correctly."

Pointing to other actions, Regan noted EPA also had rejected more than 100 small-refinery exemptions (SREs) last spring. That move, he said, "signaled a significant shift from the prior administration." The Trump administration had approved more than 80 SREs, which had frustrated the ethanol industry.

Skor, speaking to DTN, said she was pleased to hear Regan make a public commitment to "leaning in on biofuels, whether that's with a Set, making sure all of the tax incentives in the Inflation Reduction Act, we can really realize those through the Set and the RFS as well,"

Skor said she was confident EPA would be able to get a rule finalized for the eight states before next summer's driving season.

"I pressed on that. It has to be more specific sooner rather than later so the marketplaces has time to prepare," Skor said. "And so, we will just keep reinforcing that with the agency that you can't wait until June 1 to be able to issue this." She added, "Our intent is these states are able to sell E15 to their consumers next year. We just want to make sure that clarity gets out there as soon as possible."

Regan also talked about the Inflation Reduction Act, which he said is "the most significant climate law in our nation's history." He called the law a "game-changer" for EPA and said he would be working with USDA Secretary Tom Vilsack on how some of the bill's provisions on biofuels are implemented.

"We both know the agriculture and biofuel communities play a key role in helping President (Joe) Biden meet his climate goals," Regan said.

Geoff Cooper, president of the Renewable Fuels Association, was also in Washington as he, Skor and others in biofuels and agriculture were invited to the White House as part of a celebration on the IRA. The event was full of fanfare, right down to singer James Taylor performing "Fire and Rain" for the White House crowd.

Cooper, speaking to reporters beforehand, said the provisions in the IRA "could be transformative for the industry." Looking at policy for renewable fuels, Cooper said, "The Inflation Reduction Act is probably the biggest deal for biofuels since the RFS was expanded in 2007, so we're talking about 15 years."

The IRA extends the Biodiesel Tax Credit and develops a new tax credit for sustainable aviation fuels (SAF). While analysts are back and forth over whether ethanol or vegetable oil blends will be the ultimate winners in the SAF space, Cooper said there is already significant investment to transform biorefineries to SAF facilities.

The IRA also includes $500 million to build out infrastructure to sell higher blend volumes for biofuels. That's about five times higher in dollar value than any similar funding for blender pumps, storage tanks or other biofuel infrastructure needs.

For ethanol plants, which haven't had a tax credit since 2011, the industry also could tap into the $1-per-gallon Clean Fuels Production Credit, which is set to run for two years from 2025-2027. Any fuel that lowers emissions by 50% compared to standard gasoline would qualify. Cooper said most ethanol plants already score emission reductions between the 40% to 50% range. Cooper described the Clean Fuels Production Credit as the tax credit version of a low-carbon fuels standard.

"The beauty of that structure (tax credit) is it's not specific to a certain kind of fuel or process, it's focus is reducing carbon," Cooper said. "If you can demonstrate that your fuel reduces carbon by 50% or more, you are going to get the tax credit. If you can demonstrate that you are net-zero, you are going to get a larger value out of that tax credit. So, we see it as an elegant solution to the problem we are trying to solve, which is decarbonizing transportation fuels, and not picking winners or losers." 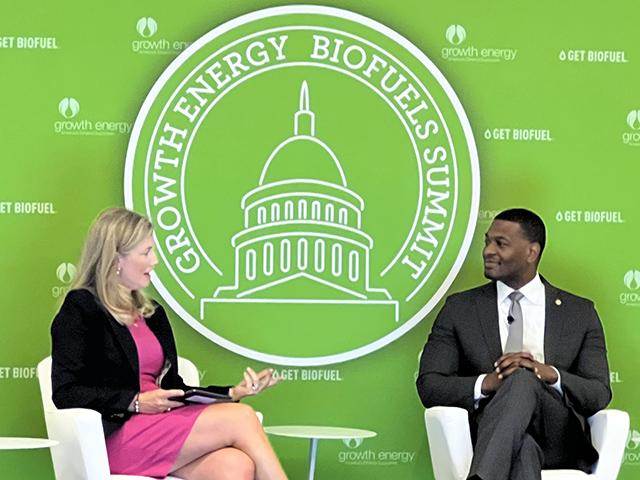