The drought of 2022 shows no letup in many areas of the Great Plains and western Midwest. The 60-day period from mid-September thru mid-November saw precipitation totals which were largely no more than 50% of normal. The result is bone-dry river and stream beds, including a big portion of the Platte River in central Nebraska. The riverbed is so dry that it's turned into an off-roading destination instead of a primary watercourse. Calculated soil moisture ranking in over half of Nebraska is only 1%.

DTN reached out to regional National Weather Service (NWS) offices in Valley, Nebraska (eastern Nebraska) and Hastings, Nebraska (central Nebraska) for details and comment on the situation and implications for the start of the 2023 crop season.

Responses indicate a great deal of concern that the dry streambeds will continue to be a feature during 2023 as well. "It's probably safe to say the prospects for soil moisture recharge are not good for the Spring growing season," said Michael Moritz, warning coordination meteorologist at the NWS in Hastings. "Any precipitation we manage to receive will be devoured quickly in the short-term, and the long-term prospects could take a handful of wet seasons to recover."

David Pearson, senior service hydrologist at the NWS in Valley, has a similar opinion when it comes to soil moisture recharge prospects. "Regarding soil moisture recharge, I believe our state is in a precarious situation. It appears we will leave the fall without any substantial moisture recharge," Pearson told DTN. "While we've had some moisture, it certainly isn't enough. The best we can hope for is an above-normal snow year and repeated storm systems this spring to begin the recharge process. This depletion in soil moisture will take several weeks to months to fix."

In central Nebraska, Michael Moritz at the Hastings NWS office pointed to the Platte River's very low flow 10 years ago in 2012 continuing into 2013 even though precipitation increased from around 12 inches in central Nebraska in 2012 to more than 27 inches in 2013. "While 2012 was the dry year ... 2013 averaged half as much discharge for the year. Basically, we used the nearly 27 inches of precipitation in 2013 mostly as recharge and not as flow in the Platte ... unless we have an exceptional (precipitation) year next year, this type of flow is likely next year assuming we use most of the future precipitation for recharge."

Moritz also is concerned that a recently more-active weather pattern in the U.S. may be more of a strong wind producer than actually offering snow for the Platte basin.

"Significant systems have crossed the central U.S. and we have been largely missed," Moritz said. "Even the somewhat above-normal early season snow in Colorado has fallen west of the Continental Divide. That is concerning. If we were to see a warmer-than-normal stretch with some wind return in the next few weeks, fires could really be a problem."

And as for the Platte River, its sandy four-wheeling track could be a drought avatar for quite some time. "The Platte River mostly dry the past six months is just one highly visible symptom of the ongoing bigger picture issues," Moritz said. 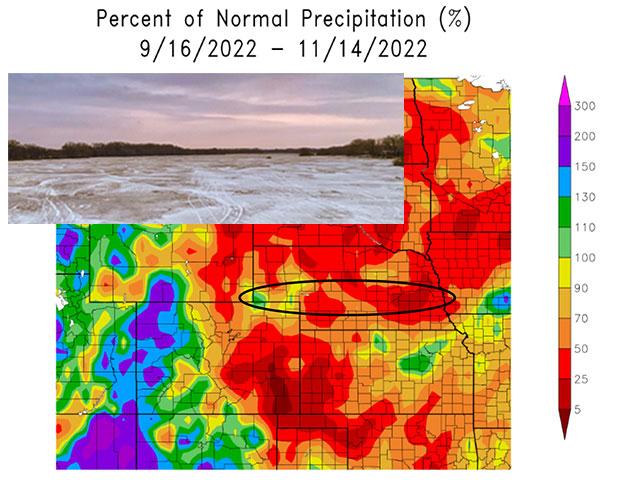