LINCOLN, Neb. (DTN) -- Agriculture interests on the front lines of charting a climate course for farmers and ranchers say there may never be another time like the present to expand conservation and other carbon-sequestration programs.

With numerous pieces of federal legislation introduced that could provide economic opportunities for agriculture to expand conservation efforts, panelists speaking to reporters during the North American Agricultural Journalists conference on Wednesday said that there may not be another funding opportunity quite like this.

The Growing Climate Solutions Act was reintroduced in the U.S. Senate last week and is drawing bipartisan support. (See "Groups Support Carbon Credit Bill" at https://www.dtnpf.com/….) The bill would create a certification program at USDA to provide technical assistance for farmers and forest owners to enroll in a carbon-credit market.

Randy Russell, principal of the Russell Group representing the Food and Ag Climate Alliance, said on Wednesday that he's optimistic the act can be completed this year.

"Look, I would hope that we could get the Growing Climate Solutions Act up on the Senate floor and passed," Russell told ag reporters. "I think we got a lot of work to do over in the House. It's clearly on a much faster track in the Senate."

Though work on a 2023 farm bill could provide some opportunity to expand conservation and other programs to address climate, Russell said it was likely not going to happen in that farm bill process.

"Look, the burden of proof is on all of us that support the Growing Climate Solutions Act," he said, "to educate folks as to what it means and what it doesn't mean, and that if we're going to have private markets and private markets are going to flourish.

"Some of us that have been around a long time, I've done eight farm bills and I've done farm bills when we actually had a surplus like in 2002 when we added $73.5 billion to the baseline," Russell continued. "I don't think anybody should live under the illusion that there are going to be new dollars available as we write the 2023 farm bill."

In addition, the Agriculture Resilience Act has drawn support from ag interests for its conservation and on-farm energy proposals.

Russell said any legislation will need to be bipartisan, and the implementation of any new programs will have to involve all stakeholders to make it successful.

Ferd Hoefner, former policy director for the National Sustainable Ag Coalition, said this is why other ongoing legislative efforts present a good opportunity.

"This is it," he said. "This is the opportunity. We shouldn't be looking, as the agriculture community, as if this was the farm bill. I think there's multiple bills out there that point the way and become a roadmap for what we need."

Clay Pope, Oklahoma rancher and member of the Oklahoma Farmers Union, said future climate programs will have to take into consideration early adopters of conservation and other measures, as well as geographical differences for producers.

In addition, Pope said the programs need to be farmer friendly.

"I think one of the things that a lot of people lose sight of is that depending on where you're at, it's going to depend on how much carbon you can sequester," he said.

In dry areas of Texas, for example, Pope said farmers already have minimized or eliminated tillage, are planting cover crops and have incorporated livestock.

"They're doing everything that we want them to do," he said.

"But, at the end of the day, it's gonna take them a hell of a long time to build organic matter because they're farming in the middle of a desert. They just can't sequester carbon at the rate of, say, someone in Iowa. I think the federal government needs to think about that, because right now when you start talking about market-based solutions, it's the Wild West."

Pope said there are going to be situations where farmers and ranchers want to sell carbon credits but face high costs to do so.

"That's, that's a concern because if it doesn't make economic sense, it's too overly complicated on producers, they're just going to throw their hands up, walk away."

Reuters reported on Wednesday that although Microsoft bought close to 200,000 farm-based carbon credits, it also rejected more than 5 million ag credits for lack of verification of their climate benefits.

Deb Reed, executive director of the Ecosystem Services Market Consortium, said during the panel the Microsoft example is indicative of the challenges agriculture faces in certifying and reaping the economic benefits of carbon credits.

"I think that's incredibly important because agricultural credits that come to market that don't have credibility could sink the entire endeavor on behalf of farmers and ranchers," she said. 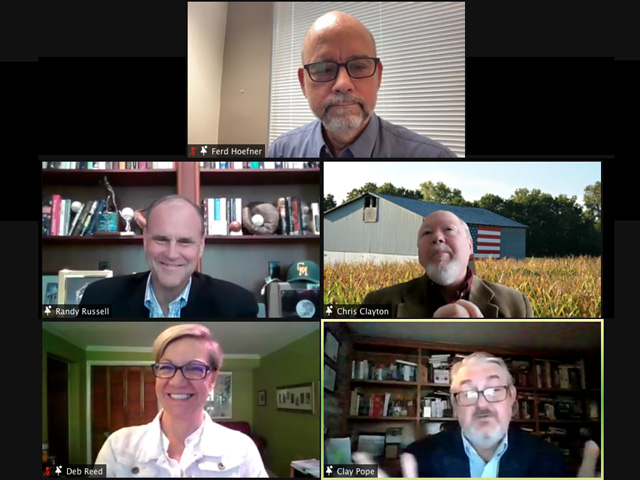