The Wall Street Journal reported Tuesday that container ships are stacking up at southern California's ports as U.S. demand for Asian imports is creating more logjams for ships. The WSJ reported 37 container ships were currently anchored off Los Angeles and Long Beach, the highest number since 40 last February.

The logistical challenges of the pandemic are driving importers to bring in cargo earlier than normal, the port director for Los Angeles told the WSJ. https://www.wsj.com/…

The situation puts even more pressure on U.S. exporters because Asian shippers for more than a year have been willing to send back empty containers across the Pacific as fast as possible rather than send back containers loaded with U.S. goods. That leads to logjams for agricultural commodities of all types trying to move on containers to Asia.

At the 2021 Cattlemen's Convention last week, DTN spoke about the container situation with Travis Arp, senior director of export services for the U.S. Meat Export Federation.

"The logistics situation in general, specifically on the West Coast, is tight," Arp said. "There are backups at the port and everything kind of compounds upon itself. We've got ships that are still anchored off these ports waiting to dock or get reloaded. On account of that, we've got containers sitting at terminals waiting for ships. When you have got containers sitting at terminals, that backs up the railways. So it really works its way from the West Coast all the way back to the center of the country and that kind of jams up the entire supply chain as a result right now."

While export sales of red meat have been strong through the summer, they could be higher because there are thousands of containers sitting on the West Coast waiting to go out. It remains a logistical challenge for American shippers that the freight rates Asian exporters are willing to pay for containers is still nearly double what U.S. exporters are paying for those containers. That disparity makes shippers more willing to send containers back to Asia empty. "As long as that disparity continues, then there's going to be very tight availability for containers because vessels are very willing to load them up empty and send them back to Asia," Arp said.

The key cog is U.S. consumer demand remains high for imported Asian products. As long as that demand remains high, there's going to be an incentive for Asian exporters and carriers to continue sending empty containers back to China. That's going to be a difficult trend to change, even with increasing complaints to the Federal Maritime Commission. Arp said that requires some change in the "detention and demurrage" charges for those empty containers sitting at ports. When a carrier denies a spot for a container, then the port charges daily fees for the container to sit there. "If the carrier is refusing to carrier that container, then it's out of bounds for them to be charging the exporter a fee because they rejected a spot on that ship that was already booked," Arp said.

The Federal Maritime Commission can better enforce rules on the reasonableness of the detention and demurrage charges to help defray some of the costs for exporters so that if a container can't get on a vessel, then the exporter isn't losing thousands of dollars while that container is just sitting there for weeks waiting to go out.

Exporters also are looking harder at getting product out of the East Coast and the Gulf of Mexico just to try to avoid some of those delays in the California ports because they know if they send those containers west, they are not sure when they are going to get out. That's led to record shipping volumes at ports such as Savannah, Georgia this summer.

"So we've heard of company that are shipping more products to Asia out of Savannah and New Orleans and Houston, and even though they know it's going to take a couple of more weeks for it to get to its destination, they are just more assured they can get the product on a vessel and moving elsewhere," Arp said. 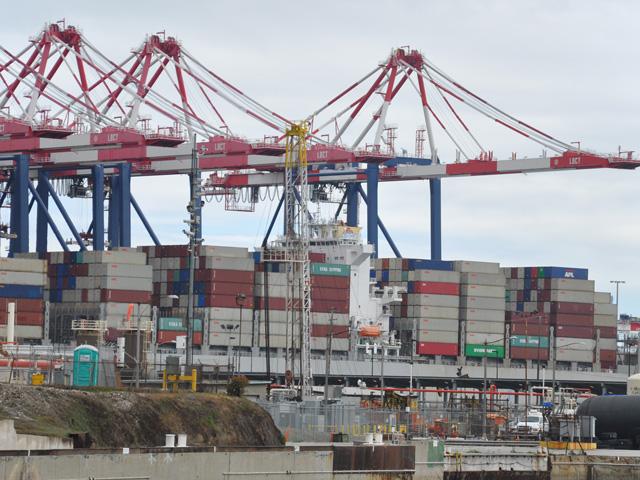